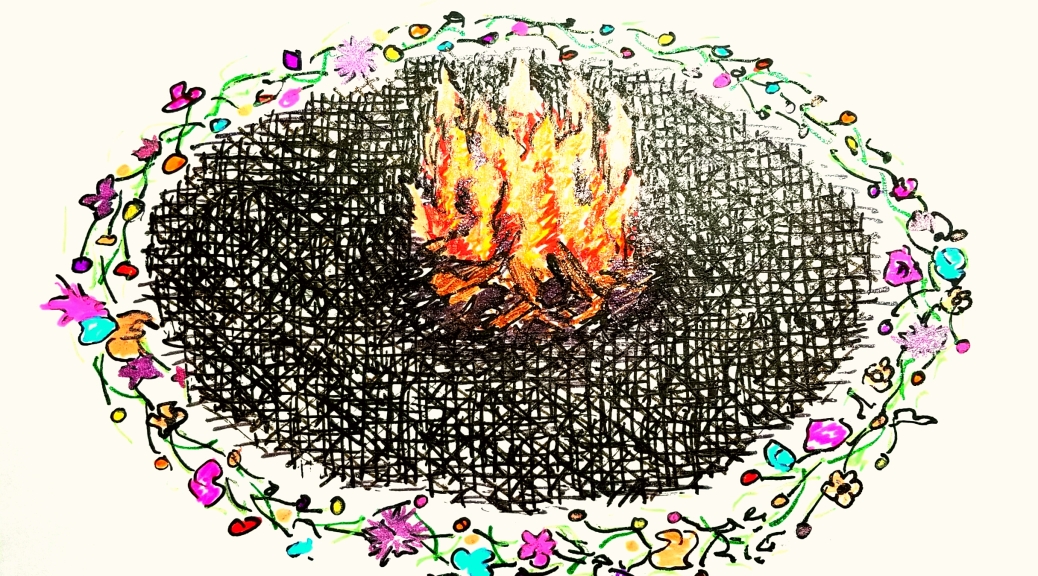 ​It is said that long ago a ship splintered to pieces on the hard coast of this world, spilling ten children onto her shore.  All that is remembered of the place they left behind was that two nations fought bitterly there; and among them, some had come from one nation and some the other, hoping to start anew in peace.

They rode to this world on the breath of a great autumn storm, and close in its wake was something they’d never experienced before – winter.  And with winter, hardship.

The children, who had once banded together because of their wish not to fight their families’ wars, found new arguments to hatch and so split apart into separate camps under a rain of wounding words.  By the time winter sank her icicle teeth into the world’s aging sinews the camps had adopted the prejudices and policies they had rejected on that different shore.

Winter hushed this new land. Animals cozied in with their stockpiles to have a good long nap but the children found little to eat, and stole food from each other under the cloak of the long nights.

Winter released a cool sigh that swept a chill into the marrow of every living thing, and near the ocean ice rain pelted down upon the camps until both were equally sick and miserable.  Each assumed jealously that the other camp had better placement and used the last of their strength fighting with stones and sticks for the privilege of higher ground. In the end their camps stared at one another jealously across a ravine from equal heights.

What little light the sun gave in her brief visits to the sky did not translate to warmth.  The children grew weak with hunger.

It was the boy named Azmir who made the first journey of peace between the camps.  He arrived at the door of his enemies’ snow-covered hut with fire roasted fish; the last of his supply.

“I offer this in friendship,” he said with hands trembling from more than the chill, “and to recall the vision we once shared.  This world is frightful and cold, and if we are to survive it, we would do well to remember what we once knew.”  The others took the fish without words spent, and Azmir returned home.

The next day, the girl called Minan appeared at Azmir’s door.  Clutched at her chest was a thick coat made from animal skins.

“I offer this in friendship,” she said with teeth chattering from more than the chill, “and to recall the peace we had once between us.  This world has lost its warmth and color, and it seems to me that it lies within us to decide whether it’s lost its heart as well.”  The others took the coat without words spent and Minan returned home.

The day after that, winter’s wind calmed for an afternoon while the sun peered shyly over the sleeping world.  Azmir and the other children of his camp set out bearing roots they had wrestled from under the snows.  Meanwhile, Minan and the other children of her camp set forth with meat from a successful hunt.  They encountered each other halfway, at a place where the path between their camps sank toward the beach between the two rises.

“We offer this in friendship,” Azmir and Minan said at the same moment, and they laughed in embarrassment.

“We had best start a fire,” suggested Bishma, from Minan’s camp.

“I’ll help you,” offered Masfa, from Azmir’s camp, and they found that months at odds hadn’t made them forget how to build a fire together.

Warm cackling flames soon roared between them and a feast sizzled upon it.  The children made a new camp there, bringing together all they had learned in their short experience of this new world.

Soon spring laughed her lighthearted way into the world, sending winter to sulk in the north, and hiccupping color across the fields and hills.  The sun grew bolder, spending longer hours lazing across the sky and sharing more of her warmth.  The children built homes in a circle around the fire pit, founding a town.  They wove a great a wreath around the fire with spring’s bright flowers.

“This is to symbolize the need we have for each other,” said Minan, placing the last flower.  “May we never forget that split into pieces we wither, but linked together as one we thrive.”

“We will place a wreath here when we have reason to recall this lesson,” added Masfa, handing a flower to each of her companions.

“Our town needs a name,” said Bishma.  “It was Azmir and Minan who remembered what we’d forgotten and brought us together.  “I say we call this place Azminan.”

Azmir and Minan blushed together.

“It’s my hope,” Azmir said at last, “that someday that name will be the meaning of peace.”

And many years later, it was exactly that.